Sam and Geoff talk Roku 3, Internet Sales Tax, the Retron5 and Sons of Anarchy and much more, along with The Weekly Whatchas.  The music in the audio program is “American Trash” by Innerpartysystem.  The full song will play after the show on the podcast.  They have given us permission in the past and I’m sure they would do so again if they hadn’t called it quits in 2011. 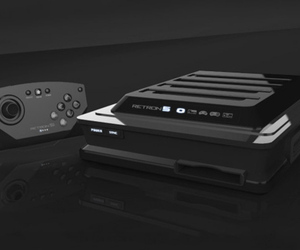 If you are an old school gamer and love your cartridges, this may just be your thing.  The Retron 5 by Hyperkin will play just about any cartridge-based game and upscale them to 720p through HDMI.  The unit is compatible with NES, SNES, Famicom, Super Famicom, Game Boy Advance, Game Boy Color, Game Boy, as well as Mega Drive and Genesis titles.  Add to this it’s ability to save anywhere with a variety of options, and you’ve got yourself a winner.  The expected retail price will be under $100.  It may end up only being a penny shy of that, but I guess you have to take what you can get!

I suppose it couldn’t last forever!  I am a big fan of shopping online.  One of the greatest benefits to my Amazon Prime membership is that I could get things shipped to me for free of shipping fees or sales tax, but not for much longer!  There are a couple of more hurdles for this bill to hop, but with how it has been packaged and the margin that it won in the Senate, this will soon be a reality.

An Internet sales tax is inching its way closer to being the law of the land: The U.S. Senate supported a non-binding vote of approval, 75-to-24, for a law that would allow states to collect taxes from Internet retailers. If enacted as is, it would allow states to levy taxes on some online retail purchases from businesses with over $1 million in gross receipts.

Internet retailers can thank their mostly tax-free existence to a 1992 Supreme Court Case, Quill Corp. v. North Dakota, which declared that companies without a “substantial nexus” in a state didn’t have to pay sales tax. “Quill became a seminal case for online retailers: It meant, in essence, that they didn’t have to pay state and local sales taxes,” writes the Washington Post’s Ezra Klein.” That’s allowed them to undercut traditional brick-and-mortar stores on price. It’s also meant that state and local governments, which rely heavily on sales taxes, have lost enormous amounts of revenue as more and more commerce has moved online.”

There are some exceptions: Amazon currently charges California residents sales tax, and will soon charge residents of Massachusetts and Connecticut, after new offices and acquisitions gave it a significant presence in those states.

A score of Internet lobbies, such as Netchoice, representing Facebook, Yahoo, and (TechCrunch’s parent company) Aol, argue that the senate’s bill “does nothing to address what the Supreme Court says was an unreasonable burden on interstate commerce,” explains Steve Delbianco of Netchoice.

An equally self-interested set of lobbies, such as the National Retail Federation, representing the big box likes of OfficeMax, Macy’s, And Saks, argue that an Internet sales tax ban gives online retailers an unfair advantage and deprives states of billions in revenue.

The current law will give readers a flavor for the sausage factory that is the U.S. Congress. The tax was offered as a non-binding amendment to the Democratic budget by Senators Mike Enzi and Dick Durbin.

“The strategy of the bill’s supporters is to offer this general amendment and then claim that all the senators that vote for it support the bill,” explains Brian Bieron, eBay’s senior director for federal government relations and global public policy, to CNET. “That is not just a stretch, it is not accurate. But the game plan is to rack up a sizable vote and then make the claim the bill itself should jump over the Finance Committee and go right to the floor.”

So nothing is law yet, but it’s getting closer.

Earlier this week, fresh screenshots of the Durango XDK (the developer kit) leaked, and pointed to the next-generation Xbox console requiring all games to be installed to the hard drive. According to the alleged documents, retail game discs will be installed to the console’s hard drive and users can begin playing the game during installation. However, once the game is fully installed the game disc is no longer necessary, and playing from the optical drive will actually be prevented.

Furthermore, the XDK documentation states that the console “will always maintain a network connection so that software and games are always current.”

Source
While these things aren’t proof positive, it seems to be leaning in that direction.  The end of the article points out something that we have discussed on the show:  Many popular games have used purchasers buy the pass that allows multi-player.  They could do a similar thing to unlock the disc.  That is, unless MS decides to lock discs to a single console or gamertag.